What do you think makes a book cover successful? What are some of your favorites?

A good cover should be visually arresting and true to the feel and content of the book; it should also, ideally, look like nothing else. Probably my favorite series of covers were the Penguin Classics of the 1970s and 1980s and 1990s—well-selected art in an elegant graphical setting. Paperback covers in general feel to me more integral to the book than dust jackets, which are literally wrapped around the book and always carry (again, for me) a whiff of the provisional.

What had been your experience with the design of your covers prior to Freedom and your overall feeling about them?

My friend Michael Pietsch, at Little, Brown, once observed that choosing a cover is the most important decision an editor makes in publishing a book, and I’ve been fortunate to work on all my books with FSG, which lets its writers participate in that decision. 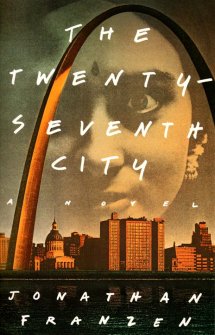 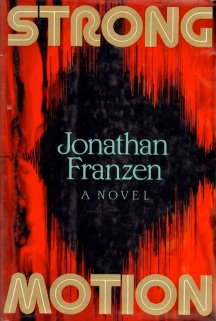 The late Fred Marcellino did a killer design for my first novel, but we had all sorts of trouble with the second novel. When I signed off on the last design for its cover, I had a fever of 101 and was hours away from leaving New York for the summer; I was really not of sound mind that afternoon. Coincidentally or not, Strong Motion was the only one of my novels not to earn out its advance. After that, I decided to take a more active role in proposing ideas for covers and offering feedback, and I was fortunate, again, to have the talented Lynn Buckley for my next four FSG titles.

How much input did you have in the design of Freedom‘s cover?

Well, a lot, since this was FSG. I initially suggested a wonderful Anne Neely painting, an abstraction of a denatured landscape, but [FSG president and publisher] Jonathan Galassi didn’t feel it had broad enough appeal.

But Charlotte started with the idea of a landscape (I believe I also suggested the word “vertiginous”), and Jonathan was intent on putting a warbler on the cover. After a couple of false starts, which I rejected out of hand, Charlotte came up a design with the warbler against a vertiginous background of green forest. I was resistant to the foregrounded warbler, because I was afraid people would think I’d written an environmentalist novel or had become loony about birds, but Jonathan liked it. (“That’s Patty,” he said, “chirping ‘Mistakes were made!'”). My friend Donald Antrim then saw the design and suggested a change of color. (“I don’t know why it is,” he said, “but it’s well known in publishing that green covers never sell.”) So Charlotte found an image of a northern pond at sunset, an image that originally had a very orange, apocalyptic cast. That was the color that was used on the ARCs, but Jonathan and Charlotte continued to tinker and ended up with something more blue and purple. I was worried that we were losing the “edginess” of the design, but I finally deferred to Jonathan’s publishing wisdom. The only vertiginousness or edginess remaining in the final cover is in the receding title font.

What was your initial reaction to the final version? What did you like best about it? 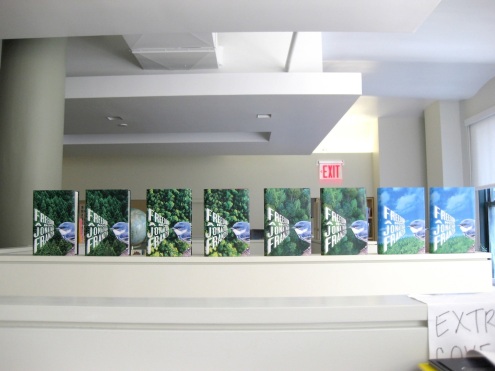 I’ve been designing book jackets at Farrar, Straus and Giroux for over a decade, so I was in the art department when Lynn Buckley was working on her now iconic cover for The Corrections. It was exciting to see that come together, and to have the opportunity, ten years later, to work on Freedom.

There’s a process for getting a book jacket approved, and it involves many voices. In the case of Freedom, I would say it was more of a chorus!  There was understandably much excitement surrounding the publication of this novel, and we wanted to get the packaging right. Our creative director at the time, Susan Mitchell, who was generous enough to have given me the opportunity, saw all of my early rounds. Then we shared them with our publisher, and then, of course, Mr. Franzen himself. The jacket also went to roundtable meetings (as all book cover designs do) to be discussed with the heads of FSG’s marketing and publicity departments and other bigwigs from within the company. Jonathan was incredibly helpful the whole way through. We were in touch early on, and he is as clear an art director as he is a writer. Discussing the novel directly with him was not only a treat but also incredibly helpful to my process.

As a jacket designer, it’s valuable to have a strong sense of the tone of the writing of the title you’re working on. I make notes when I’m reading a manuscript, and I flag pages so that I can go back and reread certain passages that stick out to me and offer up clues on how to solve the jacket design.

It was clear from the start that a cerulean warbler was in many ways the star of the book, and we had to include one. My first thought was that maybe it should be illustrated to bare more resemblance to The Corrections jacket, which had become so recognizable. At some point in the process, photography seemed the right way to go. My father-in-law was a naturalist in the Cincinnati, Ohio, parks system for many years and has an excellent eye for nature photography. I reached out to him to see if he’d ever photographed one of these sweet birds, and he ended up putting me in touch with an old friend of his. Sure enough, Dave Maslowski had many shots of this particular warbler, and I ended up choosing one in profile, clipping him out of his natural environment and making him as strong and graphic as possible—shooting like an arrow into frame.

I knew that the jacket had to look important and confident. I wanted the landscape to feel hyper-real—almost apocalyptic—and the type design was inspired by Jonathan’s request that it be “vertiginous.” I guess in a way the type triangle sort of reminds me of one of my great design influences, Aleksander Rodchenko. I adore the famous “Portrait of Lilya Brik” from 1924.

Although I wasn’t specifically thinking of it at the time, surely this way of treating type is imprinted on my mind.

When I saw a picture of President Obama holding a copy of Freedom, with my photo of a cerulean warbler prominent on its front cover, I got a bit of a thrill. I now knew for certain that even the POTUS has seen one of my photos. I have been photographing birds for magazines and calendars ever since Nixon was president.

I read Freedom curious to see why the cerulean got included in a novel deemed to be a major work in literature. I was surprised by the book’s breadth. It covers a vast array of topics, from environmental issues, to the war in Iraq, to a wide range of personal demons that typically haunt heroes, villains, and victims discussed in English lit classes. Jonathan Franzen seems to have Encyclopedic knowledge about—and an opinion of—almost everything, of both timely and timeless substance.

The bird on the cover was photographed in a southeastern Ohio state forest, not far from the West Virginia coal fields featured in the book. The cerulean is a gorgeous little bird that seems invisible in forest foliage high overhead and remains largely undetected unless you look for it (or at least listen for its somewhat nondescript song). The image on the cover is about two times life-size. The shot was taken in 2007, and considering the average life span of a warbler is two or three years, the bird’s grandchildren now haunt the ancestral home, which presumably is not yet a coal field. 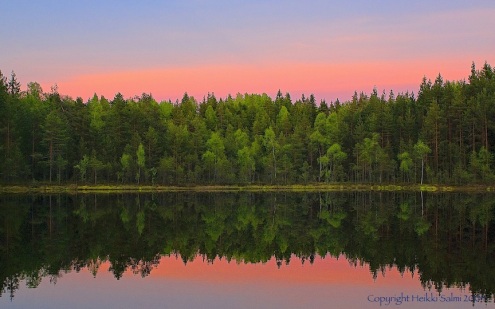 The “Tranquility” photo was taken on May 29, 2009, in a place called Siuntio. Siuntio is a small village in southern Finland. My parents have a small summer cabin there. The cabin is located on the top of a hill by a small lake, or maybe it would be better called a pond. The place is truly extraordinary, and I haven’t seen a place like it anywhere else. When you approach, you would never guess that there is a pond on the hill, you only see tall trees and thick woods. There is only one way to get to the pond and that’s a narrow, winding road which goes right through the middle of the yard of a farmhouse, just beside their cow house. At the end of the narrow and bumpy road, there’s a parking place so small that three cars can create a serious parking problem. From the parking place you still need to walk three-hundred yards uphill to the cabin.  From there is a nice view down to the pond. The pond is small but it is actually very deep. The water is very warm in the summer and kids love to swim there.

That particular night we were spending a great time at the cabin with my family. In the evening, I was sitting at the jetty by the pond when the sky started to turn to a pinkish hue (although in the book cover it has been colored more yellow). I quickly grabbed my camera and took a couple shots. Fortunately they turned out nicely since the pink sky was gone in minutes.

I like the shot very much. For me, it represents tranquility and quietness. The hill goes down very steeply just behind the trees and that creates a very nice isolated effect to the trees and gives room for the pink sky.

I did not know that the photo was used on the book cover until I was asked to write this. It is pretty ironic that the Finnish version of the book has a different cover. 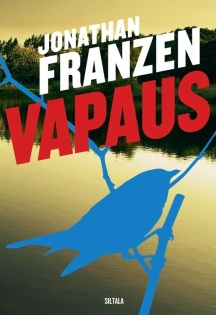