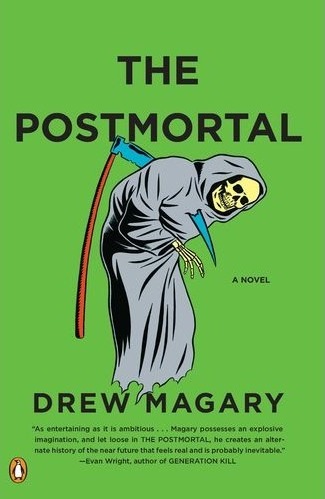 The cover process for The Postmortal was actually fairly easy, because when I sent the manuscript out, I had already asked Jim Cooke to do a little mockup of the Dead Reaper (a drawing that appears in the novel at one point) because it seemed like a cool, iconic thing I could use as both a calling card for the book and a Twitter avatar. So I said to Penguin, “Hey, I have this nice, clean icon here already, so can we do that for the cover?” and they agreed. (Cooke designed the UK cover, published by Harper Voyager and retitled The End Specialist.) 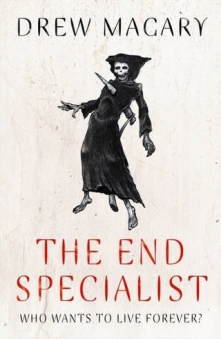 The way it usually works is that the publisher asks you what you have in mind for the cover, then you suggest a few things, and then they send you the cover and they’re like, “Here you go.” And then you’re like, “But can I see some more options?” and then they’re like, “OUR SALES TEAM LOVES IT, SO TOUGH SHIT.”  When I first wrote a book, I assumed they would send me fifty different fully designed covers for me to Lord over. But that’s not true at all. They send you one, and you have to fight just to change the font.

Anyway, the cover to The Postmortal didn’t involve much wrangling because we all liked it from the beginning. I think it’s really important now to have a clean cover with an icon that you can use everywhere else. We put that Reaper on buttons. We put it in the book trailer. We could do a million things with it, which is important.

Penguin US contacted me by e-mail and asked if I was interested. I believe it was Gregg Kulick, who is an art director there. The first draft turnaround was really quick. They already had a very clear idea of the illustration I was to do. I was even given a pencil sketch to look at, which was helpful.  I think they had a few people doing a first draft and then they ended up using mine.

I did not read the book before I started. Mr. Kulick might have given me a short description of what it is about, though. I did read it when I got a finished copy and liked it. I haven’t worked on that many book covers, but I imagine you won’t always have time to read them before you start.

The only other real book cover I have done was for A Clockwork Orange where I basically had carte blanche, which was more trying I guess. Clockwork also comes with so much visual baggage whereas The Postmortal was a first edition and a fresh start. 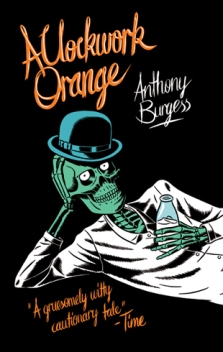 I did two drafts of The Postmortal cover, but they were almost identical, just a slight tweaking of detail in the skeleton’s face. Both of the drawings for the cover—the grim reaper on the front and the syringe on the spine—were done as free-standing spot illustrations, so I did not have to worry about layout so much. The type and general design for the cover was all done by Mr. Kulick.

We tried out a few color variations on the drawings and I was actually quite surprised to see that the finished cover was going to be all green. I think it started out as being black apart from the illustrations. I like the green version better. The colorful and bright graphics are eye-catching without suffering from it, and I like the contrast of the dark imagery and the fun colors. The initial idea of the grim reaper with the scythe through its back is very direct and clear and funny.

It’s hard to say what makes a good book cover. Books are so different and I guess the covers have to reflect that. What’s good for one cover might be a horrible choice for another. I’m generally partial to design that is clear and reads well. Fuzzy photoshop images are not for me.