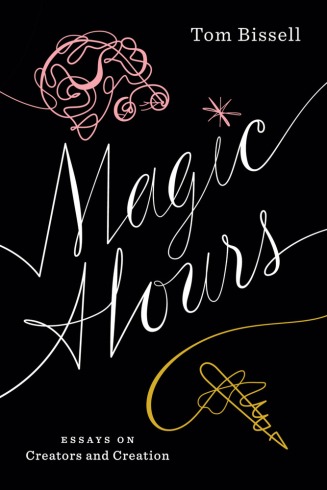 One of the things I do here at McSweeney’s is design many of our book covers. I’m a longtime fan of Tom’s, ever since I read a short story of his, “God Lives in St. Petersburg,” many years ago in McSweeney’s Quarterly. Tom’s essays for The Believer have always been a highlight of that magazine, and I read each of the Believer “Magic Hours” essays when they were first published.

So when it came time to figure out who would design Tom’s cover, I eagerly threw my hat into the ring. The cover idea—a pink human brain; a gold writing hand; some light in the darkness—came quickly. I slept on the idea and it still felt good when I woke up, so then I called Jessica Hische to ask if she’d like to do the actual drawing. She said yes, and I was happy. I knew that with Jessica onboard, we’d end up with the world-class result Tom’s book deserved.

Jessica and I went back and forth on some of the fine points of the cover art—I remember suggesting the addition of the asterisk above the “i” midway through the process. But really, there were only two big drafts: my rough sketch and the final cover.

I showed Tom the cover when it was just about done, and hoped hard that he would see what I was trying to do, and like it. To my great relief, Tom was happy.

I’m personally happy with this one because it was a joy to work on, and I think that joy comes through. Here’s an attractive cover that doesn’t feel like it’s trying too hard. It just grabs your attention. It just works.

I’ve been sitting here wracking my brain to think of something interesting to say, and there’s simply not much, other than I really like it. It’s the first one they showed me, I loved it, they said, “Cool.”

I’ve always been fairly indifferent to the covers of my books, which comes from my having been an editor and seen firsthand authors behave like shits about their covers; I never wanted to cause anyone that grief.

So I’ve always said, “Sure, looks good!” if they’re into it.